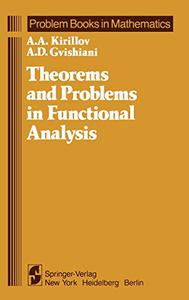 Theorems and Problems in Functional Analysis by A. A. Kirillov
English | PDF | 1982 | 351 Pages | ISBN : 038790638X | 27 MB
Even the simplest mathematical abstraction of the phenomena of reality the real line-can be regarded from different points of view by different mathematical disciplines. For example, the algebraic approach to the study of the real line involves describing its properties as a set to whose elements we can apply" operations," and obtaining an algebraic model of it on the basis of these properties, without regard for the topological properties. On the other hand, we can focus on the topology of the real line and construct a formal model of it by singling out its" continuity" as a basis for the model.